Deciding to get married was a mind-altering event for me. Some side-effects included confronting my mortality, dropping my religion, quitting my job, and publishing a comic book. Several friends have told me that my decision-making process was helpful to them, so I decided to write it up. 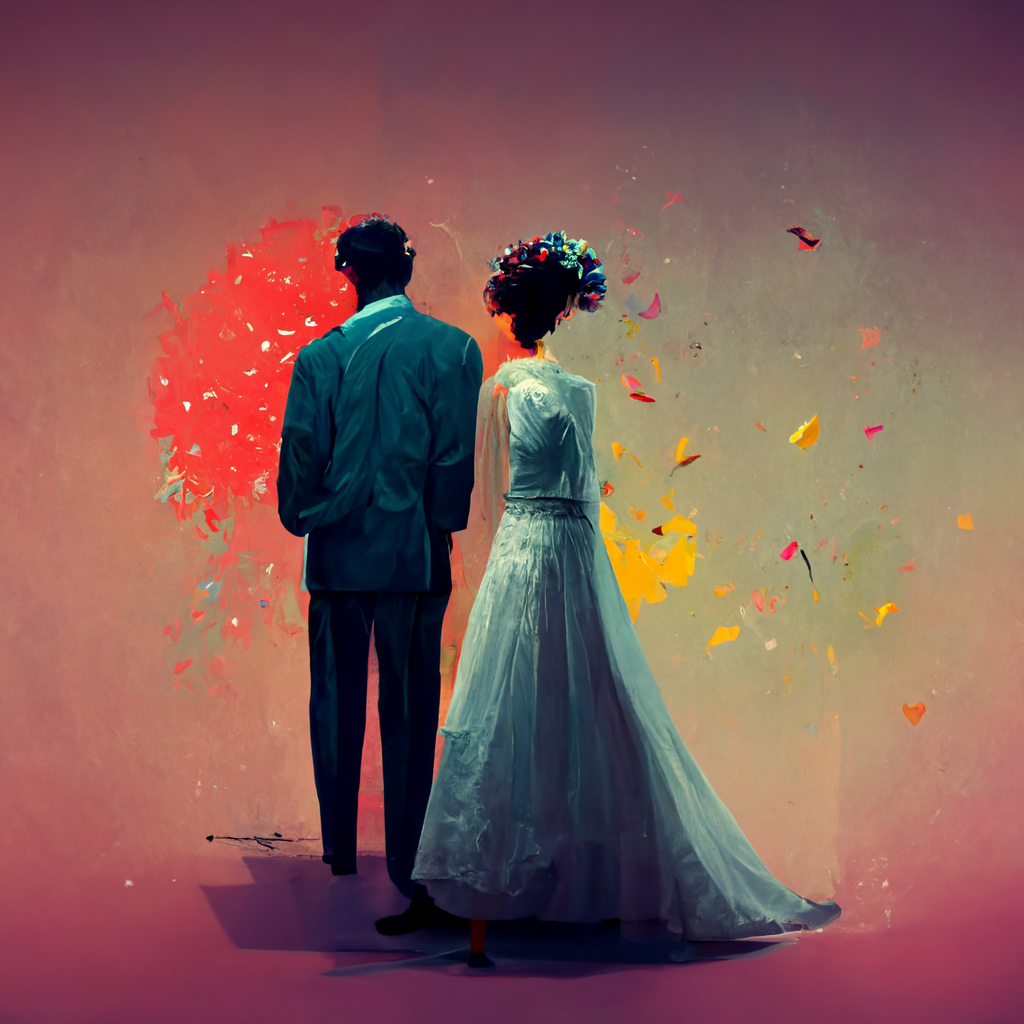 I met Amy in 2006 when we were both freshmen in college. Our relationship was a very slow burn, moving from an undefined kind-of-dating thing in that first year to a year of long distance after graduation, during which we enjoyed our almost-single lives in separate cities and spoke barely once or twice a week. Even when I first moved to New York to join her, we lived in separate boroughs for a year.

Because of how early our relationship started and because of the reality-distorting playground that New York represents for young adults, we were able to put off conversations about the future of our relationship for years. I don’t think marriage was even brought up until 2015, after nine years of dating. By then we’d fully merged our social circles and had drawers of things in each others’ apartments. Most of our friends had only ever known us as a couple. She eventually delivered the traditional message: it’s been fun, but now it’s time to make a decision.

This was a surprisingly difficult decision for me. I won’t go into the full timeline but it stretched over months and involved multiple outside counselors and a lot of hurt feelings. When I asked my friends and family for their thoughts, the advice was basically unanimous. Most memorably, a cousin told me, “I’ll support whatever you do, but you’re an idiot if you don’t marry her.” This was a pretty lonely time for me.

It’s obvious why other people gave me that advice. Amy is lovely, kind, generous, smart, and very cute. She has two doctorates and a great smile. One time when I was on a business trip and my dad was unexpectedly hospitalized, she spent a full day with him after pulling an all-nighter the night before to study for an exam. She was once spontaneously proposed to on the street. So what was wrong with me?

I had a few specific concerns. I think both Amy and I would individually be great partners to a lot of different people. We’re both even-tempered and easy to get along with, we have good professional careers but aren’t too obsessed with our jobs. We laugh easily and don’t escalate fights too often. But were we really specifically right for each other?

The details of my concerns don’t matter too much but I’ll go over them briefly. One mismatch is that I am much more novelty-seeking than her. Put less clinically, I feel like there is some kind of divine / creative spark behind our lives and I’m hungry to seek it out. There’s some feeling, like one day I’ll meet the right stranger or peek behind the right door and find a whole new world, behind the veil, that is suffused with light and meaning. I’m more interested in strange movies and scenes, weird art and weird artists. Amy prefers to watch the West Wing and the same three police procedurals on repeat. I get it! If I was working 10-hour hospital shifts every day I’d probably want to relax more too. But I’m not.

When I thought about our relationship, I didn’t feel the deep longing or the feeling of finally finding a missing piece that other people talk about. As silly as it is, this XKCD comic gave me serious mental stress during this time

Underneath it all was a lot of fear. What if I woke up one day in middle age and regretted spending my whole life with the wrong person? How was I supposed to know who the right person was? On the flip side, could I really walk away from such a great person over such vague misgivings? I looked for peace and reassurance but all I could find was more anxiety. I was paralyzed with indecision for months.

one day you will die

I know this is weird, but one truth that helped me finally make a decision was this: one day in the not-so-distant future, I was going to die. On that day, there wasn’t going to be a scoreboard or an instant replay to tell me whether I’d made the most optimal decisions throughout my life or show me how things would’ve gone if I had married someone else. There was just going to be my life, and how I felt about the choices I’d made. Would I be able to accept them?

Thinking about the end helped me in another way. The stakes felt so high because marriage is forever. How could I make a decision for forever? I’d never done anything like that before.

But I realized that actually, I was just making a decision for the next 70 years. And by putting off the decision for so long, I’d actually already made a decision for the last ten: to spend them with her. So I wasn’t trying to scale something up from 1 to infinity, I was trying to scale it up from 10 to 70. And by the way, I’d better learn to start making decisions consciously, because by putting off the decision, I ended up spending ten years in an undecided state. It’s not like I got to stay young forever by putting that decision off. Every day I was just getting older with an implicit decision instead of a consciously chosen one.

Those realizations helped lower the stakes and helped me realize I really did have to choose. But I still didn’t feel anything, and no one had ever taught me how to make this decision or anything like it. I didn’t have any role models I wanted to follow. So how was I going to choose?

Sometimes I like to follow my wild impulses and see where they take me (see novelty-seeking, above). That’s led me into plenty of decisions that I won’t confess to in writing. But for the most consequential decisions, I try to be level-headed and just get the most important things right.

When new pilots get lost in the clouds, it’s easy for them to get disoriented and start to make bad decisions. The advice they’re given is: trust your instruments. When your senses are lost, they’ll tell you which way is up and which way is down.

The goal here was to find a partner that I could build a life with. The important criteria were the same ones they would be for anyone else: a partner who is kind, reliable, good at making decisions and resolving conflicts, someone that I was physically attracted to. I asked trusted people around me to double-check that I wasn’t missing any red flags. I might never know if this was going to be the best person for me, but I just had to make a decision that I thought would work out, and all of the signals were green. So I went for it. And she said yes!

As I mentioned above, the process of making this decision shook a lot of other things loose in my life. It’d been ten years of adulthood already! How long was I going to wait around in a job I didn’t love? How long was I going to put off creating the comic I wanted to write? Wait for some kind of sign from a God I was losing faith in?

Making decisions in the face of uncertainty is hard. I’d always been great at school, where careful analysis eventually yielded the fixed right answer. But learning to make this decision without a sure answer unlocked the rest of my life for me. Fingers crossed, but it’s been great.